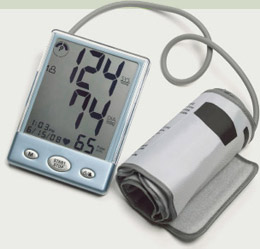 Risk factors for high blood pressure - and the serious health conditions that can follow.

Some of the major risk factors for high blood pressure include:

What is a high blood pressure reading?

Tips for bringing or keeping your blood pressure under control: 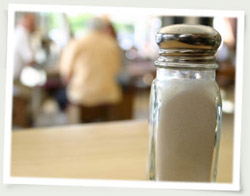 You may be consuming too much sodium

Our bodies need sodium: it regulates blood pressure and blood volume and plays a key role in muscle and nerve function. But too much sodium in your diet can pose health hazards, including high blood pressure and increased risk of heart attack or stroke. The good news? You can help reduce your daily sodium intake with some simple dietary changes.

Tips for reducing your sodium intake

Although cutting back on table salt sounds like the easy solution, all forms of sodium need to be taken into consideration. only 6% of our daily intake of sodium comes from added table salt. Most of our sodium intake comes from packaged, processed, store-bought and restaurant food (about 77% of it, in fact). Naturally occurring sodium accounts for about 12% of daily intake and 5% comes from salt used in cooking.

You can help reduce your sodium consumption by incorporating these tips into your daily diet:

Sodium can also be found in certain over-the-counter and prescription medications. Consult your healthcare provider about potential sodium content.

From the Research Desk... 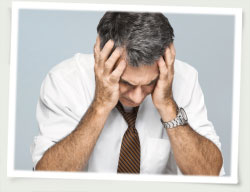 Los Angeles, California - People in stressful social situations show greater increases in inflammation, researchers from UCLA reported in the Proceedings of the National Academy of Sciences.

In the study, 124 volunteers were placed in awkward social situations: giving an impromptu speech, performing difficult mental arithmetic and taking part in an online game. In all scenarios, participants were subjected to social rejection.

Researchers discovered that participants who showed increased activity in brain regions that responded to social stress also had increases in inflammatory activity when exposed to acute social stress in the lab.

"This is further evidence of how closely our mind and body are connected," said George Slavich, a postdoctoral fellow at the UCLA Cousins Center for Psychoneuroimmunology. "We have known for a long time that social stress can 'get under the skin' to increase risk for disease, but it's been unclear exactly how these effects occur. To our knowledge, this study is the first to identify the neurocognitive pathways that might be involved in inflammatory responses to acute social stress."

Researchers noted that chronic inflammation can put people at risk for a variety of health conditions including heart disease, depression, certain cancers and more.

Morgantown, West Virginia - Use of Omega-3 fatty acids prior to a brain injury may help reduce the resulting damage, scientists reported in the journal Neurosurgery. These same researchers discovered in past studies that the Omega-3 fatty acid docosahexaenoic acid (DHA) showed positive results in post-injury treatment and wanted to test its effects when given prior to injury.

Using rats, researchers administered DHA for 30 days and then induced traumatic brain injuries. The rats given the highest amounts of DHA experienced the least amount of tissue damage.

The scientists concluded, "The potential for DHA to provide prophylactic [preventive] benefit to the brain against traumatic injury appears promising and requires further investigation."

London, United Kingdom - Spending more than two hours per day watching TV or on the computer can increase the risk of a cardiac event, according to a study in the Journal of the American College of Cardiology. 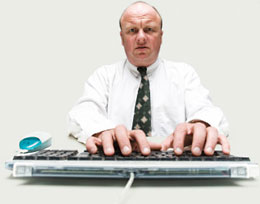 Researchers followed 4,512 Scottish men for four years and found that those men who spent two or more hours in front of a screen every day were 125% more at risk of a cardiac event than those who watched less. Those who watched four hours or more were 48% more likely to die from any cause.

Scientists concluded that inflammation and metabolic risk factors partly played a role. C-reactive protein, a marker for inflammation, was two times higher in those with four or more hours of screen time than those with less than two hours.

Physical activity did not lessen the risk of cardiac events.

Join the conversations:
Other Popular Posts

+ Add your comment
Showing comment(s)
TM
June 5, 2014
The info about stress and how it may cause chronic inflammation is good... but now I have even one more reason to be more stressed!
Abe at DetroitHealth.com
June 9, 2014
Thanks for your feedback. But please don't stress if you're feeling stressed. Here are 5 tips for managing stress and 5 additional suggestions for how to control chronic inflammation:

1. Don't turn to drugs or alcohol: These may seem like a quick fix but they usually only make an already bad situation even worse.

2. Try to build a trusted support network: This often helps to diffuse stress more effectively than isolating ourself with our problems.

4. Be disciplined about having a normal routine: Don't let work and worries define your life.

5. Do things you enjoy: Listen to music, walk your dog, treat yourself to a warm bath or massage.

1. Manage your weight: Excess fat - especially around near the organs in your midsection - responds to inflammation by creating additional inflammation.

2. Eat smart: An antioxidant-rich diet with abundant fruits, vegetables, beans, nuts, olive oil, and fish can have an anti-inflammatory effect.

Bottom line: Inflammation in any part of the body can contribute to whole-body inflammation. So, making healthy lifestyle choices may help to minimize chronic inflammation, along with a number of very serious health consequences.
Allen
September 26, 2012
I would have been skeptical of your report that time in front of the TV screen is all that dangerous, even if we exercise. Coincidentally, however, i read this article just today from our Boston NPR station that not only confirms what you're saying but they even go one step further and forecast exactly how much that hour in front of the TV will shorten your life (22 minutes!) http://commonhealth.wbur.org/2012/09/hour-tv-22-minutes-life
▲ jump to top of article

Subscribe to our RSS
Information provided here should not be relied on to diagnose, treat, cure or prevent any condition, disease or illness. Please consult with your physician or health care professional for guidance on any health concern. DetroitHealth.com is a commercial website and is not affiliated with any government agency, university, or private medical center. COMPENSATION DISCLOSURE: This site may be compensated for products promoted here. Read our Privacy Policy and Terms of Use.